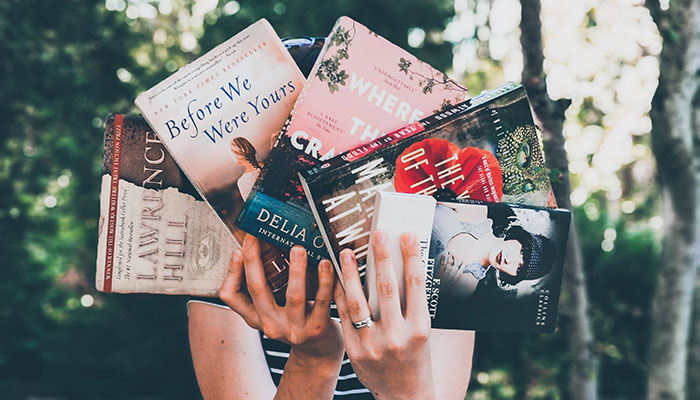 In this post I will try to select five of my all time favourite books and explain why I choose them to be on this list.

I have to admit right at the bet that I did not like reading when I was younger. My mom taught me this trick to use in school. It went like this: read the summary from the back of the book, transcribe it using your own words and you’re good to go. The only reason this actually worked so well was because none of my literature teachers ever asked us to think about any of the artworks from the compulsory reading list. What a shame though! Reading is everything! The most wonderful thing about it is precisely the fact that different people have different thoughts about certain books. You can spend hours discussing them. That’s why book clubs were invented.

For some messed-up reason, however, I decided to take English Literature as my major at the university. There were no more excuses there, you kind of had to read the books, or at least find some kick-ass analysis of them to pass the exams. That was where I truly learned how to love reading. Even more so after I finished my studies and was left to my own devices. Finding new books to read is an adventure on its own and I have to say, I am kind of addicted to it.

Choosing only five books for an all time favourite books list is definitely a hard thing to do. How far do I go back in time? What are the criteria by which I decide which ones to include?

I am not going to complicate this, so there’s only one rule by which I will abide: did the book make me feel things? Sadness, happiness, anger, whatever. Simply, did it have an emotional impact on me when I was reading it?

Margaret Atwood: The Year of the Flood

The Year of the Flood is the second book in Atwood’s MaddAddam trilogy and my favourite of the three, although I do love them all. In this second part we see less of Snowman and more of a religious cult called God’s Gardeners. It seemed to me that in the sequel to Oris and Crake, Atwood managed to detail the many facets of how people are using technology to serve their own selfish purposes a lot more than in the first or third book (eg. the production of meat that is actually not meat, the splicing together of different animals and other immoral experiments that are only meant for gaining profit). It is revolting to see how nature is only seen as something to exploit, something to take from and never give back. What is really scary about it though, is that Atwood did not invent any of the experiments described in the book. She said in an interview that all of the technological ‘advancements’ detailed in this novel are ones that scientists are actually already working on today. All she did was take them a bit further and, of course, exaggerate them a little.

The MaddAddam trilogy is not an easy read, especially the first book where not much seems to be happening (if you are paying attention, though you can find out a lot of things about what actually ignited the spread of the global pandemic). I recommend it to readers who are patient and who are more interested in character development than the story itself (although the story here is pretty cool as well).

I think I’ve read this novel a total of three times. I don’t think I need to tell you what it is about. You have probably either read it or at least have seen one of its big screen adaptations.

I adore this book because it’s so full of symbolisms it’s impossible to find them all at the first read. I love Gatsby’s character, the little lost child on the inside who is struggling to have his way. Every time I read this book I find something new, something meaningful in it.

I remember the first time I read it. I was fascinated by the symbolism behind “Dr T. J. Eckleberg’s eyes”, looking down at American society, judging all the time. At the second read I felt so connected to Gatsby through that infamous green light, the symbol of both the rising and the destruction of his hopes and dreams. During my third read of the novel, I found a quote that stuck with me and is still one of my favourites. It’s uttered by Daisy when she talks about her daughter (you know the one I’m talking about!).

I hope she’ll be a fool – that’s the best thing a girl can be in this world, a beautiful little fool.

It makes you feel things, doesn’t it? It made me wonder about my own role as a woman in our society, even though a lot has changed since the 1920’s.

So, if you haven’t read The Great Gatsby yet, there’s still time. It’s full of hidden gems, waiting for you to discover them.

Find this book on:

Delia Owens: Where the Crawdads Sing

No surprises there. I don’t think anyone is wondering why this book has made it onto my all time favourite books list. Almost everyone I know loves this novel. I felt deeply connected to Kya and suffered the injustices life threw her way with her. I love the fact that, as a zoologist Delia Owens, was able to incorporate so beautifully some of her knowledge about the wonderful world of animals into this book.

Where the Crawdads Sing left me speechless so many times. It practically forced me to turn the pages faster and faster to find out what really happened. It proved to me time and again that I am not a good detective. Every time I thought I knew who killed Chase, the story took another turn and my theory was overthrown.

I’m pretty sure you have also read Delia Owens’s Where the Crawdads Sing, but at the off chance that you didn’t, I will kindly ask you, please do! You won’t regret it!

Find this book on:

Lawrence Hill: The Book of Negroes

This was the second novel I’ve ever read about slavery, the first being Alice Walker’s The Color Purple (duuh! Obviously!). It is a historical fiction novel which tells the story of Aminata Diallo, an African girl who is sold into slavery at the age of eleven. What shocked me the most was the fact that Africans were sold to white people by their African brothers. No white man ever dared venture into the depths of the African jungle so it was their own who captured them and loaded them into slave ships. I do not want to get into the reasons behind why they would do such cruel things, I am not here to judge. I am merely saying that this was something I did not know until I read The Book of Negroes (and did some research afterwards).

The novel describes Aminata’s physical journey from Africa to the United States, to Canada, then back to Africa and finally to England, as well as her emotional journey of pain, longing and a deeply rooted desire to help abolish slavery.

With every turn of the page I wished she would be able to singlehandedly abolish the awful practice of slavery and it pained me to realise that history did not turn out that way.

If you decide to read this book, know that you will struggle with your emotions but that it will be worth it.

The Book of Negroes is available here:

Lisa Wingate: Before We Were Yours

Honestly, half-way in I wanted to tear this book to pieces, to burn it, destroy it. That’s how well-written it is. I didn’t want to do all those things because it’s a bad book. I wanted to destroy the story, to wipe it out of history.

Before We Were Yours is based on one of America’s most notorious scandals. Georgia Tann was the director of an adoption organization who kidnapped and sold poor children to wealthy families all over America. The conditions these children had to endure in her orphanages are beyond cruel, not to mention the fact that these children were loved and wanted by their biological parents.

Before We Were Yours tells the story of what it was like to live these horrors through the eyes of the fictional characters Rill Foss and her four younger siblings. Through Rill we can see the extent of Georgia Tann’s cruelty and mastery in manipulation (even Eleanor Roosevelt consulted her on child welfare). What’s crazy about this is that this went on for almost thirty years!

The novel itself is beautifully written, every page is more interesting than the last.

Also, a lot of documentaries have been made about Georgia Tann and the Tennessee Children’s Home scandal, you can check out some of them by clicking on the links below:

This book is available on:

So there you have it, my all time favourite books list. Ask me again in a year and it will probably be different. There are so many amazingly good books out there, it’s almost impossible to choose only five. Many of them deserve to be on the list, so here are the honorable mentions with a quick rating next to each of them.

Abi Dare: The Girl with the Louding Voice 🦊🦊🦊🦊🦊

I could go on like this forever but I better stop….

What are your favourite books? What would you recommend I read next?

If you liked this post, consider sharing it with your friends as well. 🦊

Also, if you would like to read some of my book reviews, go to my Book Club page.