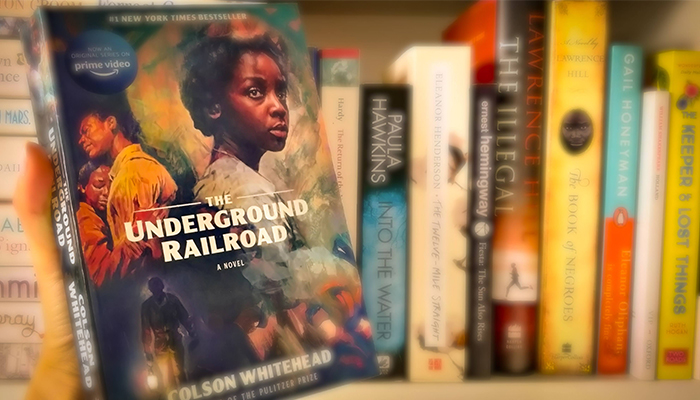 “If you want to see what this nation is all about, you have to ride the rails. Look outside as you speed through, and you’ll find the true face of America.”

It was Amazon’s Prime adaptation of the novel that raised my interest in it. For some reason, I’ve always felt deeply connected to this topic, so my eagerness to read the book before continuing on with the series did not take me by surprise.

I could probably describe my relationship with this book by using Cora’s example: maybe if I start reading in the morning, I’ll be able to finish it by night. It felt like I was actually on the Underground Railroad of American history, on that shameful period of time in their history people don’t really like to talk about.

I want to say that I loved this novel, but I feel this word does not go with the horrific, shocking and appalling events described in it. It is masterfully written, every word carefully selected, leaving the reader hungry to devour them all at once.

What shocked me the most and left me speechless was the easy-going manner in which those horrendous crimes and events are described and detailed when looking at them through the eyes of a white slaver of the time. During these instances, Whitehead presents the contemporary attitudes towards slavery and black people in general as a sort of everyday normality, without passing judgement. Of course, it is not necessary. The brutalities described speak for themselves. We don’t really need the voice of the author to tell us how to feel about those things. This is most likely meant to bring the reader back to the twisted mindset of the era in question. Showing the reader what it was like instead of telling them. Letting the reader see for themselves. The runaway slave advertisements are meant to serve the same purpose.

“According to Connelly, who heard the story from the nigger trader, Michael’s former master was fascinated by the abilities of South American parrots and reasoned that if a bird could be taught limericks, a slave might be taught to remember as well. Merely glancing at the size of the skulls told you that a nigger possessed a bigger brain than a bird. Michael had been the son of his master’s coachman. Had a brand of animal cleverness, the kind you see in pigs sometimes. The master and his unlikely pupil started with simple rhymes and short passages from popular British versifiers. ”

Cora’s journey rests upon the American nation’s foundation and sheds light on the shameful stains in their history. It is the story of the endless search for true freedom, a term that is so abstract that it is (almost) impossible to comprehend, not to mention acquire.

“Stolen bodies working stolen land (…) The whites came to this land for a fresh start and to escape the tyranny of their masters, just as the freeman had fled theirs. But the ideals they held up for themselves, they denied others.”

Reading this book, I’ve learned so much about American history. Not only about slavery, but also about the treatment of Indians and Irish immigrants during the 1800s. I recommend this book to everyone who would love to join Cora on her journey towards the idea of freedom while also immersing themselves into the mysteries of this period.

If I could give a 100 Fox rating to this book, I would gladly do so. But because I only dole out Five Fox ratings, Five foxes will have to do…

What do you think the railroad represents?

How do you think the subtle analogy between Cora’s journey and Gulliver’s travels can be explained?

What do you think about the way the everyday reality of slaves is presented in the book?

Also, if you liked this review, make sure to check out my other posts: