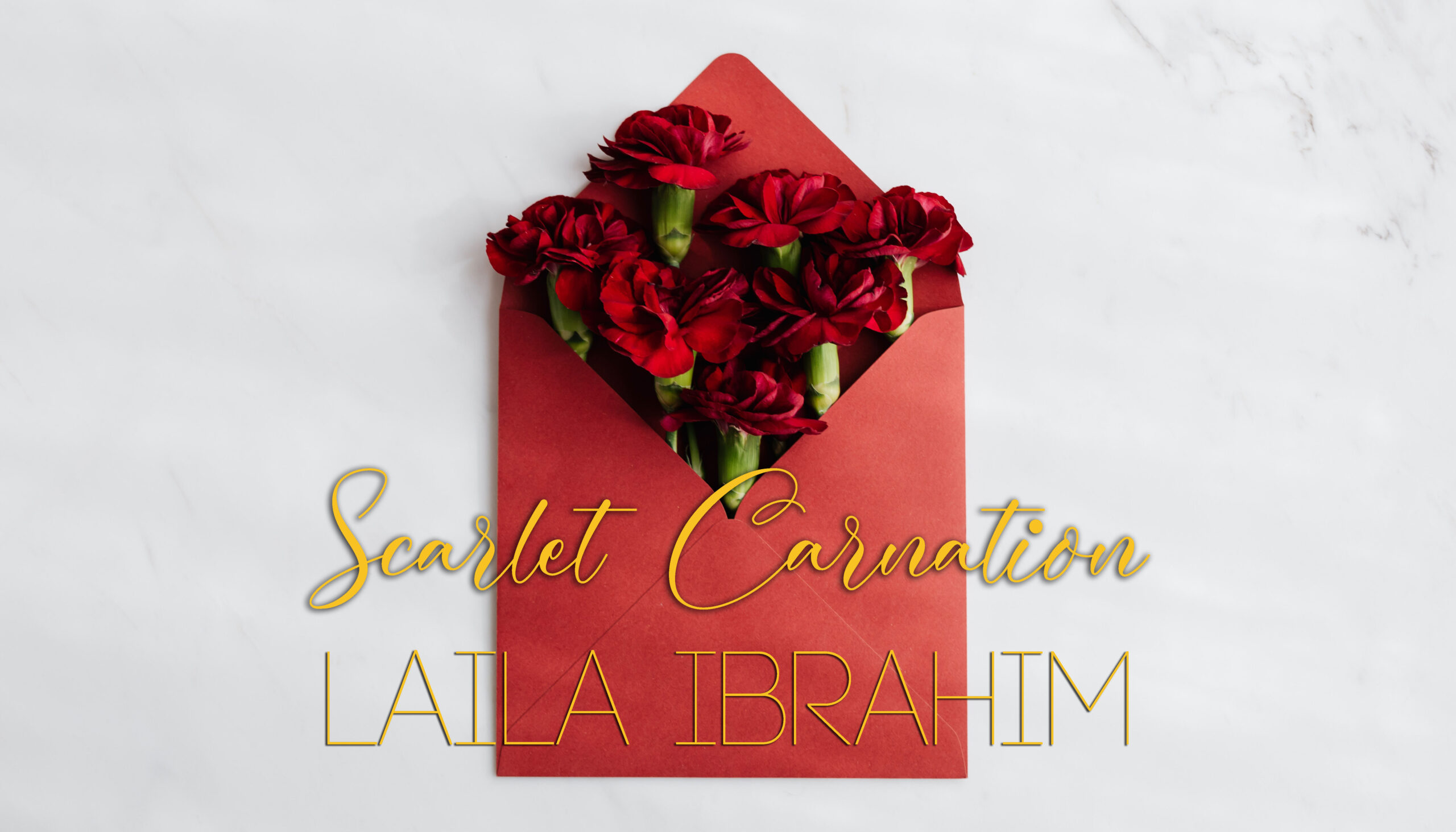 Scarlet Carnation by Laila Ibrahim is the fourth book in the Yellow Crocus series and it follows Mattie and Lisbeth’s descendants through the turmoil of the first half of the twentieth century. If you are already familiar with this series, then you know that she always chooses several very important social and political issues of the time period in question to shed light on the different mindsets and ideals that shaped our world into becoming what it is today. But before getting into these extremely important topics, let me start my review with the Author’s Note. In it, she says that people often ask her why she doesn’t write about her own experiences, her own life. This idea stuck with me, because what is writing about topics dear to one’s heart if not writing about one’s life? I believe that by reading her novels, the reader can find out a lot about Laila Ibrahim’s way of thinking, about her passions and interests. Also, one of the sweetest characters in this novel was inspired by her daughter.

As I already mentioned, each of Laila Ibrahim’s books deals with a controversial and uncomfortable topic. In Yellow Crocus, we see the relationship between Mattie, a colored wet nurse and Lisbeth, the daughter of a rich plantation owner blossom against all odds. In Mustard Seed we are presented with the cruel truths of a post-abolition society, while in Golden Poppies we find our beloved characters fighting for their rights as women. Scarlet Carnation takes these ideas further, but also introduces new ones.

“Enforced motherhood is the most complete denial of a woman’s right to life and liberty.”

Scarlet Carnation by Laila Ibrahim, I think, is dedicated to mothers first and foremost. The glue that holds the story together is the motherly love that each of the characters feel for their children. Ibrahim places the pressing issues of the time against this confronting backdrop of peace and safety of a mother’s love. One of these society-altering issues is the idea that women can choose whether or not they want to become mothers. Ibrahim mentions the early forms of contraception that were, more often than not, very unreliable (not to mention disturbing). In Scarlet Carnation, we see May struggle with the idea of becoming a mother without a husband. Her character sheds light on the many different (and beautiful) ways in which someone can become a mother. Ultimately, it doesn’t matter how someone was conceived if they are loved and cherished.

Motherhood, it seems to me, is at the roots of this book, but also of the series as a whole. With Scarlet Carnation, I felt like whatever was happening in the outside world, it still was organically connected to this foundation of affection that Mattie started building in the very first book. In Golden Poppies, Jordan promises her mother that she will throw their family heirloom, a shell, into the ocean when their people are finally free. In Scarlet Carnation, we see both Jordan and Naomi, her daughter, struggle with this promise, as they know and are experiencing the fact that true freedom is yet to become a reality. It is this promise that is at the basis of Naomi’s fierce fight against racism and segregation. After all those years and after all the positive changes, there’s still so much hatred and misunderstanding in this world.

“He’d signed up to fight Germans, to defend the ideals of America. And he was being forced to defend his dignity and safety from white Americans.”

Another important topic in Scarlet Carnation by Laila Ibrahim is the First World War, specifically the role colored soldiers played in it and their treatment by their fellow (white) soldiers. Both of Naomi’s sons enlist and the way her fears are depicted are so vivid that it is impossible not to physically feel her pain. I don’t want to give you too much detail, as I would really love for you to read the novel. Suffice to say that all of these topics are researched thoroughly, thus providing an authenticity rarely found in literature.

There are many interesting ideas discussed in this novel, and one that gains new meaning in our current times is the Spanish flu. I loved the fact that Ibrahim didn’t write pages and pages about it, as it was as much a ‘surprise’ in our characters’ life as the coronavirus was in ours. This made it all seem so very life-like and relatable. Especially the parts about personal hygiene, the wearing of masks and the keeping of a fair distance from the sick.

“May took the pruners from the pot and cut one of the mottled carnations. Like her life, it was mixed up.”

I saved the best for last, as it bears the most symbolism. I mentioned that motherhood provided the backdrop and the foundation of this series, and in Scarlet Carnation the symbolism of it is more powerful than ever. The scarlet carnation itself is meant to symbolise mothers (white carnations were worn to honour deceased mothers, and scarlet ones to honour living ones). By the end of the novel we see May pin a mottled carnation on her daughter’s shoulder. These mottled carnations represent her journey, her life, as well as the courage in choosing a path unknown to her. This, of course, can be said about Naomi as well. The Great War is reflected in the turmoil of these women’s souls, making these ‘mixed-up’ carnations a perfect symbol for both the courage of soldiers and the mourning of their mothers, as well as the inner bravery these women show in the face of adversity and the pain that it sometimes leaves behind.

Although the novel isn’t called Mottled Carnations (it doesn’t sound very good), I still feel like this is the most important image here. It represents motherly love but also the fearlessness in taking control over one’s own life.

There is one more thing that I find very interesting. If you look at the series as a whole, you can see that the colours get brighter and more vivid with each book. I think that this, in a way, is also connected to Mattie’s necklace and the promise her daughter and granddaughter have made to her on her deathbed. While each of these images has a significance on its own, if we take the series as a whole, I believe that they represent change. The more vivid the colours become, the closer we get to Mattie’s dream for her people. However, whether or not we ever truly get there remains to be seen.

My Rating of Scarlet Carnation

I was amazingly lucky as I got to experience this wonderful book before its publication in April. Just like with the first three books in the series, I felt a deep connection to the two families in the story. I hope, with all my heart, that this isn’t the end and that there will be more books to come – hopefully at least until we get to the present times. May, Naomi, Jordan and Lisbeth (and now little Kay Lynn) deserve nothing but the best, so my rating of this book, of course, is Five Foxes. 🦊🦊🦊🦊🦊

In my review of Scarlet Carnation by Laila Ibrahim, I didn’t mention the topic of disability because I truly didn’t want to disclose all the secrets of this treasure book. However, I am curious to hear your opinions about how this issue is depicted in the novel and what your views are about the contemporary attitudes towards disabled people.

As a said before, Scarlet Carnation is not yet published, but you can pre-order it on:

I can’t wait to hear what you thought about this book!

You can find out more about Laila Ibrahim and her novels here on her website.

So, have you read any of Laila’s books? Which one was your favorite? Are you also hoping for a fifth book in the Yellow Crocus series? Let me know in the comments below!

As always, thank you for reading this post! Don’t forget to read my reviews of the previous three books in the series, Yellow Crocus, Mustard Seed and Golden Poppies!

Also, if you would like to read more about African-American culture and history, check out Colson Whitehead’s The Underground Railroad or Yaa Gyasi’s Homegoing!💙